At this point there's no denying that Light Emitting Diodes (LEDs) are the best light sources currently available. Thanks to their sheer variety they can be used for almost any conceivable lighting project. One of the most versatile types of LEDs are the strip lights. What exactly are these, and what should you know about them before buying? That's what we'll discuss below.

What are LED strip lights?

They are nothing more or less than small, low-voltage, strip-shaped circuit boards with surface-mounted LEDs. The diodes are placed in regular, sequenced intervals, which enables the strips to be cut-to-length - the cut lines are marked by distinctive copper pads. LED strip lights are flexible and have peel-and-stick adhesive backing that can stick to any smooth enough surface, be it wood, plastic, metal or polished stone. All those qualities make LED strips usable in many places, e.g., along banisters, on stair, inside wardrobes, under cabinets or between cupboards. LED strips typically come in 12V variants, but there are also 24V models available.

There are two main types of LED strip lights currently available - plug&play and wired. The ones from the first group have their own power cords with a built-in switching transformer, so they can be moved around freely and don't require a separate power supply. Wired LED strips are meant for more permanent lighting fixtures and are more difficult to set up - you have to connect wires and put a transformer between them and your home's electrical grid. This requires some electrical know-how and should be done by an experienced electrician.

Many variants of LED strip lights can be found at https://lucasled.ie/led-strip-lights.

As any other type, LED strip lighting has a set of characteristics that you should consider while browsing for the right ones for a given lighting project. The main ones are as follows (in more or less random order):

The first LED strips were rather dim, but now, thanks to technological advancements, they have a very prominent shine to them. LED lighting's brightness (light output) is measured in lumens (lm) and is typically presented in lumens per meter or lumens per Watt (or lumens per foot if you browse through USA's shops). This parameter determines a strip's applications - task lighting should be way brighter than mood or ambient lights.

Here are some examples of possible lighting projects:

Many LED strips (and other LED lights) are dimmable - all you'll need is a compatible dimmer switch and controller. Just make sure your chosen strip can do it before buying those.

The most basic LED strip light emits single-coloured light, but you can find almost any colour possible - from plain white, through red, green and blue, to even some blacklight/UV models. Many LED strips are also offering multicoloured lighting (RGB) - you can change their colour with a dedicated controller if you connect them to a compatible RGB switch.

White LED lighting can have varying colour temperature. What does it mean? White light can have different hues, depending on how ‘cool’ or ‘warm’ it is. The light's temperature is measured in Kelvins (K) and the higher it goes, the colder (bluish hue, similar to natural daylight) the light will be. This might be confusing at first, as most things get warmer with higher temperatures. For example, a LED strip with a colour temperature of 1000K would produce very warm white light (orangey-yellowish), similar to candlelight, while one with 5000+K would give off cool white light. The temperature of 4000K is considered neutral. 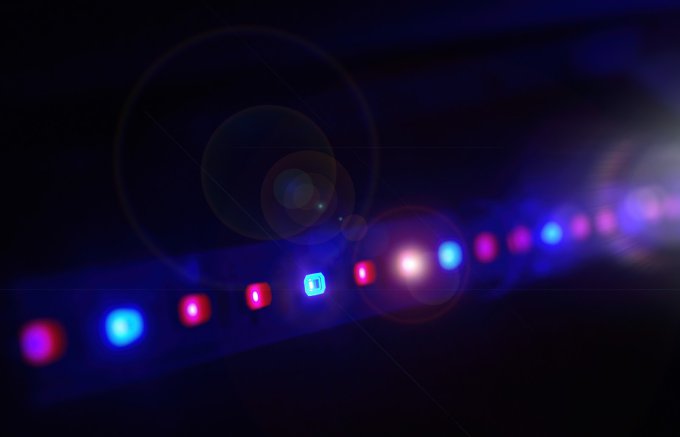 Number of LEDs per length of strip impacts its brightness and quality of light. If there's not enough LEDs per meter, the light might be spotty and the output would be rather dim. The problem here is, not all producers use the same units of measurements to advertise their LED products, so it might get confusing. The best course of action is to stick with one measurement and convert others into it while comparing LED light strips.

Knowing the strip's wattage is crucial as it's needed for choosing the right transformer. Most shops give you wattage per length up front, but some still stick to the total wattage of a reel (which is typically 5 or 10 but can go up to 30 or even 50 meters), so you might have to calculate it yourself.

Flexible LED strip lights come in one of three types of coating - non-waterproof, splashproof and waterproof. The level of proofing is measured by the strip's IP rating (Ingress Protection) - the higher the number, the better the protection against the elements. The IP rating consists of two numbers. The first one comes up to 6 and tells you how well the light is protected from solid objects (e.g., dust or sand). The second one can go up to 8 and indicates the level of protection against moisture. For example, splashproof LED strip lights in general come with an IP rating of 44, while waterproof ones often have an IP67 rating.

How to choose the right transformer?

As we mentioned earlier, all LED strip lights are low-voltage - most of them run on 12 or 24V of DC. This means that you'll need a corresponding LED driver/transformer/power supply (that's all the same device), if you want to connect them to your home's AC electrical installation.

To choose the right power supply, you'll have to know the strip's wattage and its length - thanks to this you can determine the transformer's total wattage needed. You should always remember to pick up transformers that are at least 20% more powerful than the connected LED strip light to avoid potential overloads. For example, if you want to power 5 m of a 10 W strip, you'll need a 60 W transformer. Similarly, if you want to connect multiple strips to one power supply (more on that later) it should have more Watts than their sum.

If you plan on dimming LED strips, you'll need transformers with ‘dimmable’ labels that are compatible with your chosen dimmer switches. 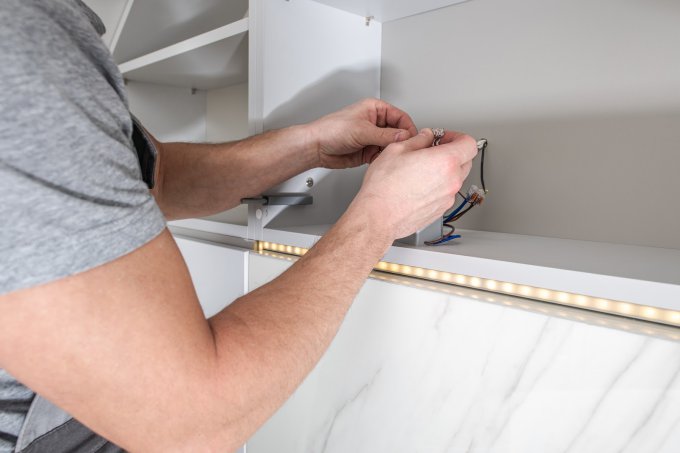 How to connect LED strips?

Each segment of standard LED strip lighting must be connected to a DC transformer - be it directly or through other segments (daisy chain). The connection method depends on the transformer's plug (if it has one) and the types of wires or plugs of the LED light strip. This varies between simple plugging and clipping/soldering the wires. Soldering wires would be the most cost-efficient solution. If you feel you're not proficient enough with soldering iron, the next best things are special solderless connectors. The summary of types of connections and things you'll need looks as follows:

Transformer with a plug:

If you want to add a dimming/RGB switch (or both), they should be placed between the transformer and the strip. To connect multiple parallel strips to a single transformer you'll need a splitter. The sequence with a dimmer/RGB switch would then look like this: transformer, dimmer/RGB switch, splitter, strips. As we already mentioned, make sure to buy transformers that can support all the connected strips.

How to determine LED strip's quality?

There's a plethora of different types of LED light strips available on the market. Unfortunately, not all of them are good quality. Here are the main giveaways of LED strip's quality:

Due to their small size, flexibility, varied colours and the ability to be cut-to-length, LED strip lights are ideal for many applications in and around the house, e.g., living rooms, kitchens or studies. They work great both for task and mood lighting. Plus, strips can be fitted into aluminium profiles, which gives them this slick ‘finished’ look that supplements modern decors. Just make sure to pick up the best quality strips, and you'll have one of the best LED lighting solutions at your fingertips.